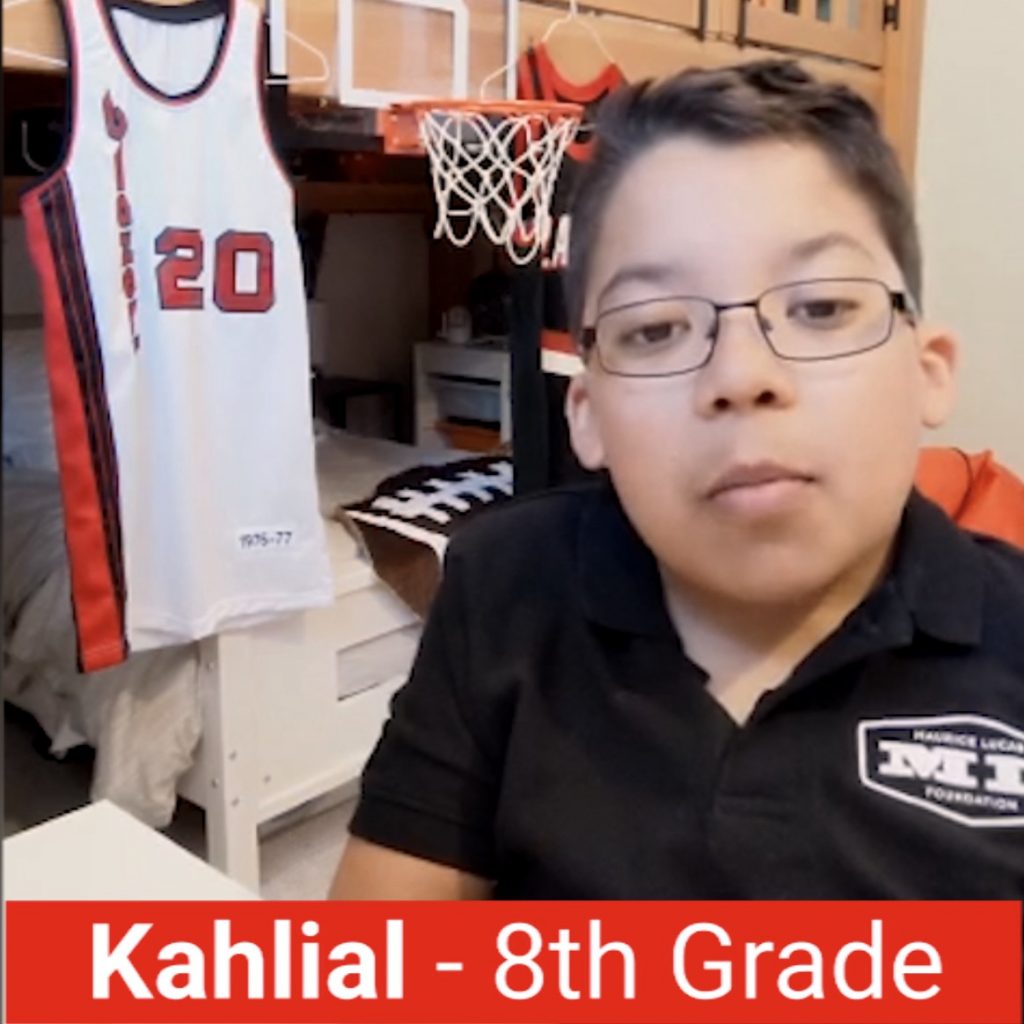 With his upbeat personality, Eighth Grade student Kahlial Lofquist of Portland brings a smile to most everyone he meets. The 13-year-old also helped bring a $4,000 grant to the Maurice Lucas Foundation, where he’s been an Academy participant since 2018.

The Multnomah Athletic Foundation gave the grant to support the MLF’s Academic Hub. Here’s how it happened:

Kahlial first became aware of the Maurice Lucas Foundation (MLF) while attending Irvington Elementary School where the foundation used to operate its Academy.

“I thought it looked like a great opportunity,” he said, adding he appreciates all aspects of the athletic, academic and leadership program.

Before joining the Academy, Kahlial struggled with working in a group, he said. The sports organized by the Academy have not only helped keep him in shape, they have also helped him develop his team skills, he said.

“I really like being able to work with kids and adults who want to be better in the academic area,” he added. “I like the overall experience and being able to talk with guest speakers who do all kinds of things and have gotten to a place in their career where I would like to be one day.”

Kahlial now attends Harriet Tubman Middle School where the foundation has moved its Academy. His favorite subjects are science, math and language. He’s not definite on a career path yet but is considering architecture, engineering or sports broadcasting.

The foundation has helped Kahlial realize the importance of middle school on a student’s future academic success, he said. He knows his participation will help him reach whichever career goals he chooses.

“We’ve created an amazing community of students and volunteers,” said Kahlial, who tutors other Academy participants. “It’s been an amazing journey. I will be in it as long as I can.”

Kahlial’s mother, Lisa, told him she had heard about a Youth Grant Initiative run by the Multnomah Athletic Foundation (MAF) in Portland. The participating youths learn about philanthropy and then award grants to nonprofit groups, using $10,000 donated by the MAF.

The MAF started the program about four years ago as part of its focus on youth, said Lisa Bendt, its executive director. The foundation consulted with educators, who advised that Seventh- and Eighth-Grade students would benefit most from such a program.

Kahlial was one of 60 students who applied for the youth grant program and was among the 26 chosen. Last fall the MAF split the youths into two groups of 13. They learned about the nonprofit sector and how it supports the community, said Lisa.

The participants reviewed the submitted grant applications in the Fall funding cycle and studied the community groups to learn more about them.

“We want the kids to focus on the merits and value of the organization and the impact of what it does,” said Lisa.

Kahlial chose the MLF and Adaptive Sports NW, which provides opportunities for health, recreation and competition through sports to children and adults with physical disabilities and visual impairments.

Kahlial interviewed MLF Executive Director David Lucas and Program Director Sheila Zachry as part of his research. Each team reviewed nine grant applications and made its recommendations to the board.

“Kahlial is a dynamite kid,” said Lisa. “He was the only one who wore a tie to the virtual presentation to our board members. He’s a terrific young person.”

Although the students ultimately didn’t choose MLF as a recipient, the Multnomah Athletic Foundation’s normal grant committee decided to gift it $4,000.

“Our two organizations both focus on providing athletic and academic support to local, underserved children to help them succeed,” said Lisa. “To support the Maurice Lucas Foundation was an easy decision. It’s impacting students in a positive way.”

The MLF is using the gift to help cover operating expenses for its Academic Hub. The foundation started the hub last September at the historic Billy Webb Elks Lodge in N. Portland to provide in-person academic support to its students.

For many parents who work, there often isn’t the time or resources to help their children with schoolwork. The hub provides live class support for four hours, four days a week, to students. The youths sign up in advance for the time they want to attend, based on the support they need.

“Our program has become essential, due to the COVID-19 crisis and the effect of inequitable access to the distance-learning provided by schools,” said David. “Our hub tutors support students safely by providing social-distanced academic help so they can continue learning.”

About the Multnomah Athletic Foundation

The Multnomah Athletic Foundation believes all youth should have the opportunity to play, compete and participate in sports. It is committed to providing character and confidence building opportunities through athletics in underserved communities in Multnomah, Washington, and Clackamas counties. The foundation provides community grants and scholarships so that youth can reach their full potential by learning and working together through athletics. www.multnomahathleticfoundation.com