A sincere thank you to all who attended and supported this year’s event!

The dinner drew 600 guests and included live and silent auctions and an after-party. Presenting sponsors were Nike, Jordan Brand and the Portland Trail Blazers. 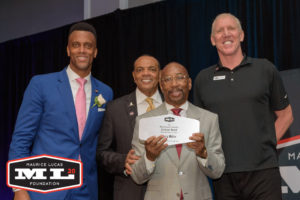 Foundation Ambassador Board members Walton and Hollins joined foundation Executive Director David Lucas in presenting the Maurice Lucas Enforcer Award to Nike executive Larry Miller. The award is given annually to an individual who best embodies many of the characteristics that its namesake displayed both on and off the basketball court, including motivating and empowering kids. Walton and Hollins are among the award’s past recipients.